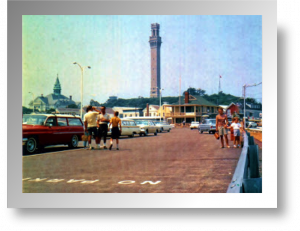 By December, David Lupone was spending so much time in Provincetown, he decided to buy a 325-square-foot condominium -- a former motel room -- as a weekend getaway.

With a mortgage, it was affordable. Or at least it was until his flood insurance jumped from $600 annually to $5,062 almost overnight.

Soaring rates in flood insurance premiums are making even the least expensive coastal havens a lot less so. The rate hikes are aimed at returning the National Flood Insurance Program to profitability. The subsidized program is running a $30 billion deficit.

Anyone with a federally insured mortgage on a building in a flood-risk zone is required to buy flood insurance.

Currently, 1,017 of Provincetown's 3,400 properties lie in flood risk zones, based on the revised maps drafted by the Federal Emergency Management Agency. That's almost double the 580 previously in the flood zones. The town sent notifications out to all affected residents last summer.

So far, there doesn't seem to be a lot of pushback in town.

"We certainly have had people coming in and wanting to see how it affected their properties, but we haven't been overwhelmed," Assistant Town Manager David Gardner said. "I think it will continue as the process progresses."

Lupone, 54, made his first trip to Provincetown in 1984 and wanted to save himself the back-and-forth trek from his year-round home in Plymouth. When something he could afford came on the market in December, he happily snatched it up.

"It was the first opportunity I had to get into the market, and I'd had my eye on this place for a while," Lupone said.

At $156,000, the price of the unit, located at the southern end of Commercial Street, wasn't bad considering the cost of real estate in this community.

"I'm about 2½ miles from the center of town," Lupone said. "Once I arrive here, I park my car for the weekend and go everywhere on my bike."

An attorney who works in the commercial lending field, Lupone was well aware of the substantial increases to flood insurance rates as part of the Biggert-Waters Flood Insurance Reform Act of 2012.

Lupone's condo was located in a flood-risk zone on federal maps when he bought it, and it will remain there on the new FEMA maps.

And since he carries a mortgage on the property, he is required by the bank to purchase flood insurance. Still, he didn't see that as a deterrent to buying back in December.

"My premium this year was $600," Lupone said. "I knew the premiums were going to go up, but I was thinking more like they might double."

Since his policy is up for renewal in December, Lupone emailed an insurer for a flood insurance estimate.

"I knew I was in trouble when the insurer said in the subject line, 'You'd better brace yourself,'" Lupone said. "The yearly estimate she gave me was $5,062, and it has to be paid up front. ... The rates are shocking. Whatever formula they're using to calculate the premiums is whacky."

Attempts at trimming the amount were unsuccessful.

Lupone now has received his renewal notification for flood insurance from the bank.

"The certificate provides very specific information," Riggs said. "It will establish where the house sits in relation to the basic flood elevation. Since the premium is related to that elevation, it could bring it down."

Frank Mancini, president and chief executive officer of the Massachusetts Association of Insurance Agents, said members aren't happy to be the ones delivering the bad news on insurance hikes to home and business owners.

"The insurance agents are just the ones in the middle," Mancini said. "The insurance rates are set by the National Flood Insurance Program, and that's the federal government. I know the agents are getting a lot of concerns from their clients."

Lupone's condominium is a fair distance from the ocean -- with a road, large parking lot and hotel in between. But he conceded water does sometimes leak into the cellar following a storm.

He said his only affordable option now is to refinance his primary home in Plymouth and drain all his equity to pay off the $135,000 mortgage on the Provincetown condo. "That will give me the choice on whether to buy flood insurance," he said.

And, given the choice, he's going to pass on it.

"Since my area has a 1 percent per year chance of flooding, I think I'll take those odds," he said.