You might've caught our blog about Drake's monumental mansion in Toronto's billionaire row. Well, we have another Beaux Arts masterpiece for you. The Breakers in Newport, Rhode Island, was built in 1895 for Cornelius Vanderbilt II with the goal of topping everything in the area.

As of June 4th, The Breakers and The Elms are both open! Visiting is the perfect quarantine activity, and since the property is so sprawling nobody will ever get within six feet of you. We're going to take a look now at The Breakers, it's history, and why you might want to visit this summer.

The original Breakers property was completed way back in 1878, and at the time, it was the crown jewel of Newport. The Queen Anne-style cottage was designed by architectural firm Peabody and Stearns for tobacco tycoon Pierre Lorillard IV. It was built along the Cliff Walk on Ochre Point Avenue, set on a sprawling estate with jaw-dropping views of the ocean.

In 1885, $400,000 secured the mansion for Vanderbilt. It was the largest real estate deal ever signed in the area up to that time. Vanderbilt spent another half a million dollars having Peabody and Stearns remodel the property.

In 1892, the investment started to burn a hole in Vanderbilt's pocket. A fire in the kitchen set the family back a few steps, but he wasn't going to let that get in the way. He was about to redesign the place in a critical way.

After this Newport summer home burned down, Vanderbilt enlisted the help of renowned architect Richard Morris Hunt to rebuild The Breakers.

The second version of The Breakers was completed in 1895, and it was once again the most extravagent estate in all of Rhode Island.

The interiors were by Jules Allard and Sons and Ogden Codman. They drew their inspiration from the rococo and baroque designs seen in the more opulent architecture of France, but they used materials and pieces that were imported from all over the world; because they could.

The new estate clocked in at 62,482 square feet of living space. 70 rooms, set on 14-acres of oceanfront property. If you're not careful, you might get lost in the halls of this Gilded Age mansion.

The basement had a laundry room and staff restrooms. The first floor has a foyer, gentleman’s and a ladies' reception rooms, a massive great hall, an arcade, a library, a music room, a morning room, a pool room, a dining room, a breakfast room, pantry, and kitchen.

The second floor included bedrooms for Mr. Vanderbilt, Mrs. Vanderbilt, their daughter, Countess Szechenyi, as well as a guest room and an upper loggia. The third floor offered additional staff bedrooms, as well as a sitting room designed by Ogden Codman with that same French opulence in mind.

After Corny passed, then his wife, their daughter inherited the estate. However, she hadn't had to do anything in her entire life and couldn't handle the upkeep, so she leased it to the preservation society of the area for $1 a year. That continued until her daughter sold it to the commission on the condition that she could live there until she passed. Nowadays, the family is still allowed to occupy the third floor, and it remains closed off to the public. Imagine if your house was the most visited attraction in an area like Newport.

It was business as usual for the Vanderbilts and The Preservation Society for many years, with the two parties living in harmony. That all changed when The Society came up with plans to build a new welcome center right on the garden, an idea that the Vanderbilts heavily opposed.

Despite protest from historians, the neighborhood, and the Vanderbilts, the board approved the welcome center in 2015. The family even took things to the Supreme Court, but to no avail.

Things turned controversial in 2018, when news broke out that Countess Gladys Szechenyi’s heirs were to vacate their 12,500-square-foot quarters on the third floor. The society claimed the mansion’s outdated guts were no longer fit for residential use.

This came as a joint statement between the society and the Vanderbilts, but many people believe it was a petty move to seek retribution for the family's opposition of the welcome center, which the Vanderbilts rolled with to save face and render the society's move void.

Plenty of parties agreed that the modern structure didn't belong on the classic grounds, and the society even considered using their plot of land right across the street, but instead decided to waste the estates garden.

The 3,750-square-foot welcome center opened in June 2018, $5.5 million later. It has ticketing stations, screens telling of the place's history, bathrooms, and a cafe. It's potentially the most aesthetically pleasing picnic spot you'll find in all of Rhode Island, and the perfect place to bring your people. 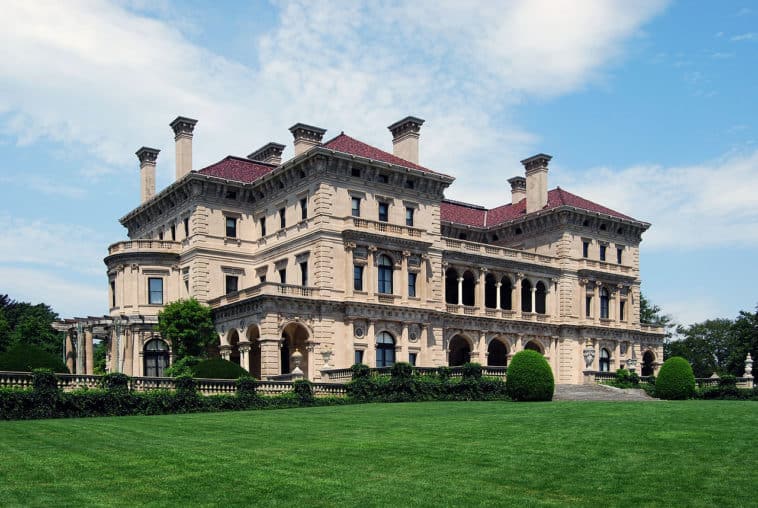 Remember to contact us here with all of your real estate needs.