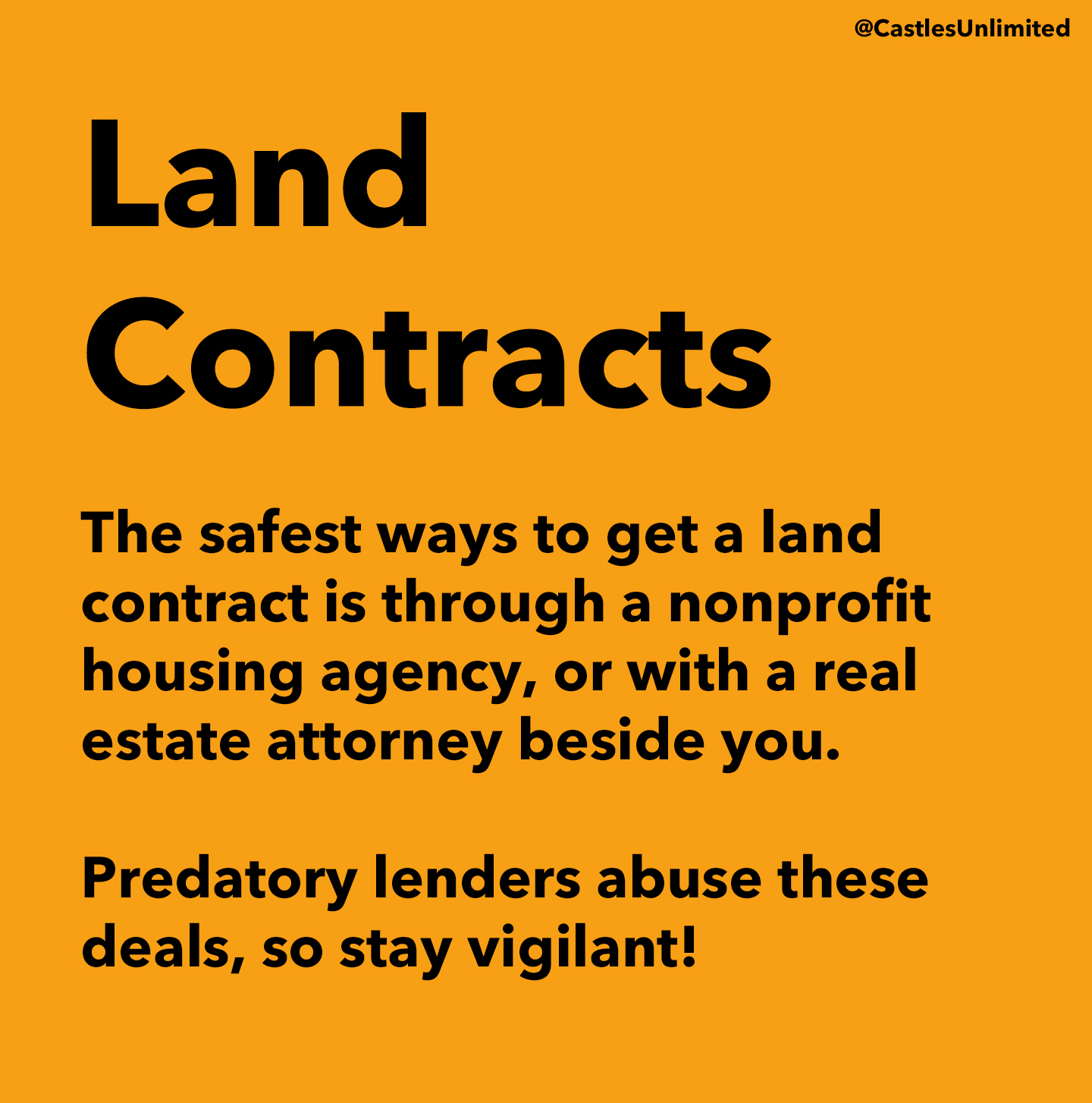 Land Contracts: What to Know

There are many of us who are financially capable of handling mortgages. However, plenty of us are barred from acquiring them. Having thousands saved doesn't mean you can leverage OPM, and that's the name of the real estate game after all. To use OPM, you need good credit, which is hard to repair, easier to build. If anyone finds themselves needing to repair it, there's still a way to buy a home despite.

A land contract is a potentially fast, simple, low-cost workaround-- or a major mistake. A land contract, (aka a "contract for deed,” “bond for deed,” “agreement for deed,” and “land installment contracts"), is a form of seller financing. Unlike mortgages, which give you a variety of legal protections, land contracts are unregulated.

There are many organizations offering land contracts as bridges to homeownership, with plenty of honest users, but they attract plenty of con artists due to how unregulated they are, so caveat emptor!

TL;DR: The safest ways to get a land contract is through a nonprofit housing agency, or with a real estate attorney beside you. There are plenty of predatory lenders offering these deals so stay vigilant!

With a land contract, you’re more owner than renter. Land contracts aren’t standardized, and the laws that do exist vary by state, but here’s the basic arrangement:

All of this sounds great, but there are cons-- literally.

Some of the risks are:

It's easy to see why these nonprofits and community programs exist. When the seller has this much control, and the laws simply don't exist to protect the buyer, these agencies are often a critical middleman.

The worst part about these contracts are that there exists a plethora of predatory contracts out there. The lack of legal protections around them leaves them ripe for fraud. It's worth noting that these predatory attacks disproportionately affect people of color (according to a National Consumer Law Center report).

These contracts are designed to work around the few legal protections the state might offer, and cancel the deal after gathering a certain amount of money from the person who mistakenly trusted the seller as honest.

A single wrong move means your money, your future property, is theirs, and you're homeless. Then, the cycle begins with another buyer.

The alternative: Work toward getting a standard mortgage instead of signing a land contract.

If you can’t get into a land contract the safe way, your best option is possibly patience. Getting into a home ASAP is probably not worth the risk these contracts offer. However, every situation is different, and, as always, what's important is that we all stay vigilant. It comes as no surprise that POC are disproportionately affected by these predators, as that's so often the American Trend, but it happens because they are particularly, statistically vulnerable. It's important to, when getting into any large undertaking such as this, do RESEARCH, and A LOT of it, and to get in touch with the right people. Take your time in this process, and if you don't have time then make some. It is worth it; we promise.