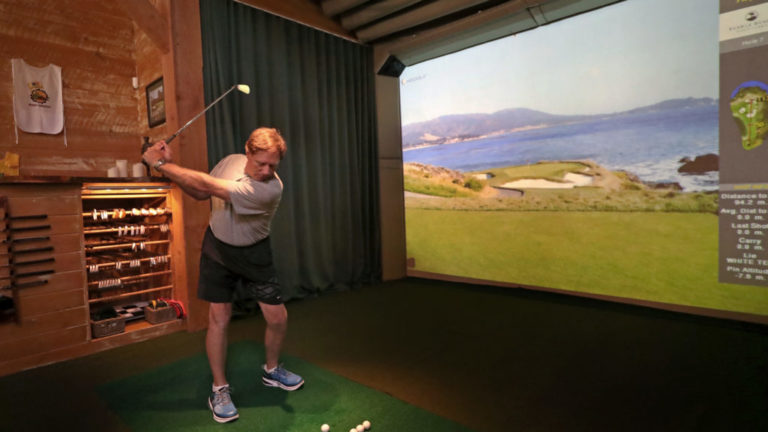 Want to score more sales? Play to win by investing in birdies, bogeys and basements.  Just ask Peter Frodigh featured in the photo; he's one of a homeowners group whisking buyers away with this HD Golf virtual reality installment.

If you're wondering about the priciness of this, let's focus on reasons to do this: no umbrella, sunscreen, or travel is required to experience famous golf courses. Now do you understand why people are rapidly and gladly paying for virtual golf? There's no shortage of money. Only a shortage of people enjoying their lives. This is one of the wisest and most intelligent investment decisions that you will make as a homeowner preparing to sell more effortlessly.

Numbers don't lie: 4 million Americans jumped on this evolving golf trend in 2016, according to Greg Nathan, chief business officer for the National Golf Foundation. Frodigh's sons Pat and Will will be teammates at Elon University in North Carolina, a senior and freshman respectively. Pat won Massachusetts Golf Association's 2012 junior player of the year award, as well as his high school state championships in 2011 and 2012. Together along with Frodigh's wife Judy and youngest son Danny, they enjoy their four year old simulator because it improves their game, not just for recreation.

Technologically speaking, many advancements have been made since the 1980s availability of information, namely swing speed, launch angle, smash factor, carry distance, arc, and apex. Instead of practicing in the rain, you can make wind and weather a factor virtually.

Frodigh says that it can produce similar data to TrackMan, a tool popular with PGA Tour players. He has around 20 courses loaded for his family, like the Old Course at St. Andres, Pebble Beach, and PGA National. Its animated graphics are very realistic.

Full Swing Golf senior vice president of sales and marketing, Jason Fierro, said that his sales have doubled in 2015. Fierro projects a 200 percent rise for his manufacturer in 2017. This is not just a toy or arcade game.

For the DIY crowd, Golf Digest magazine showcased in July's issue a $3,000 option. For those looking for a top simulator, Fierro said that Full Swing's least pricey item is $19,000 and averages $40,000 a sale. Jordan Spieth signed a sponsorship deal in 2015, so that public endorsement was a win-win agreement. Spieth won the Masters three months afterward. Two months later, he won the US Open.

Clearly, you need space to build and buy your own virtual reality equipment. A minimum of 10 feet for ceiling height, 12 1/2 feet in width and 17 feet in depth is recommended.

Immediately, golf enthusiasts noticed after walking through a renovated Weston house prior to it hitting the market. Sheryl Simon at Benoit Mizner Simon & Co. sold it for more than $4 million earlier this year. With New England luxury properties already being great in Wellesley, Needham and more, this is a perfect accent and asset, especially when the snow season returns. Dominate; don't compete.