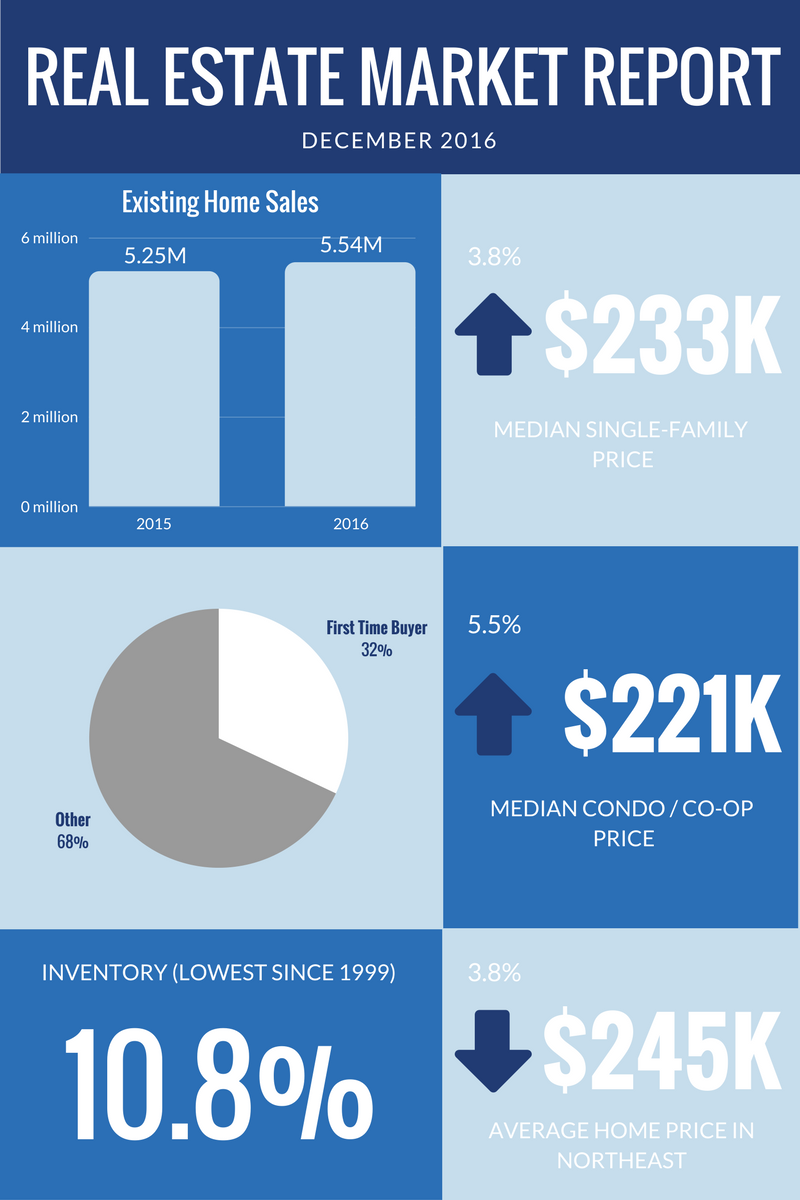 “While a lack of listings and fast-rising home prices was a headwind all year, the surge in rates since early November ultimately caught some prospective buyers off guard and dimmed their appetite or ability to buy a home as 2016 came to an end.”

December’s low numbers may be a result of hurried buying in November to lock in the low mortgage rates.  A steady decline in the number of homes on the market and prices increasing more quickly than incomes also played a part.

“Housing affordability for both buying a renting remains a pressing concern because of another year of insufficient home construction. Given current population and economic growth trends, housing starts should e in the range of 1.5 to 1.6 million completions and not stuck at recessionary levels. More needs to be done to address the regulatory and cost burdens preventing builders from ramping up production.”

First-time buyers made up 32 percent of sales in December, which is unchanged since last year. This is most likely due to constrained inventory in many areas and skyrocketing rents making it difficult to be a first-time buyer. It will take more entry-level supply, continued job gains and even stronger wage growth for first-timers to make up more of the market.

Single-Family and Condo/Co-Op Sales
Single-family home sales declined 1.8 percent to a seasonally adjusted annual rate of 4.88 million in December from 4.97 million November but are still 1.5 percent above the 4.81 million pace a year ago. The median existing single-family home price was $233,500 in December – up 3.8 since December 2015.

Existing condo and co-op sales went down 10.3 percent to a seasonally adjusted annual rate of 610,000 units in December and are now 4.7 percent below a year ago. The median condo price was $221,600 in December – up 5.5 percent since last year.

Northeast Spotlight
December existing home sales in the Northeast slid 6.2 percent to an annual rate of 760,000 but are still 2.7 percent above a year ago. The average price in the Northeast was $245.900 – 3.8 percent down from December 2015.