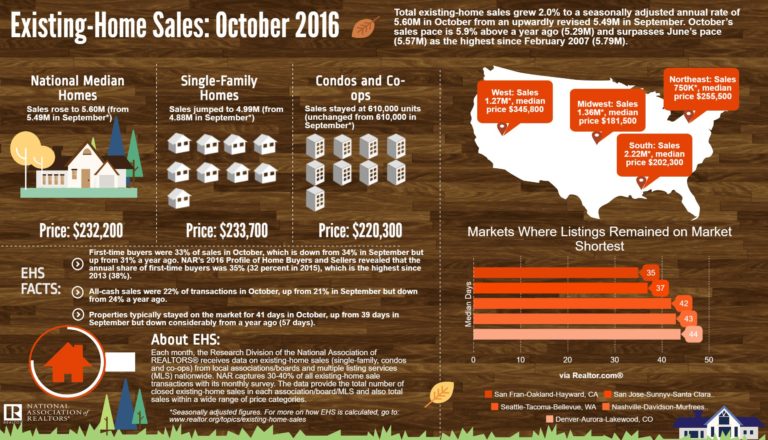 In October, existing home sales rose two percent. The sales pace is 5.9 percent higher than in October 2015 – the highest numbers since February 2007.

The median home prices rose 6% in October to an average of $232,200. This marks the 56th consecutive month of year over year growth.

Total housing inventory decreased half a percentage point to 2.02 million homes for sale. This is 4.3% lower than last year and the 17th consecutive month of year over year decline. Unsold inventory is down 0.1% since September.

NAR Chief Economists attributes the impressive sales in October to an “autumn revival” that has been essential in turning the tide of an overall hard year for the housing market.

“October’s strong sales gain was widespread throughout the country and can be attributed to the release of the unrealized pent up demand that held back many would be buyers over the summer because of tight supply.”

Distressed sales – including foreclosures and short sales – were at 4% (up 1% form September and 2% lower than October 2015). Four percent of September sales were foreclosure and one percent were short sales.

Check out single family homes for sale around Boston.