Non-traditional forms of financing new single-family home purchases remained high in 2014, but the use and mix differed significantly across the country, according to NAHB analysis of a recent Census Bureau Survey of Construction (SOC) data. In the West North Central division, only 21 percent of new homes in 2014 were attained using non-traditional financing methods. The share was twice as high in the West South Central division, 42.5 percent, and exceeded 41 percent in the Mountain division. 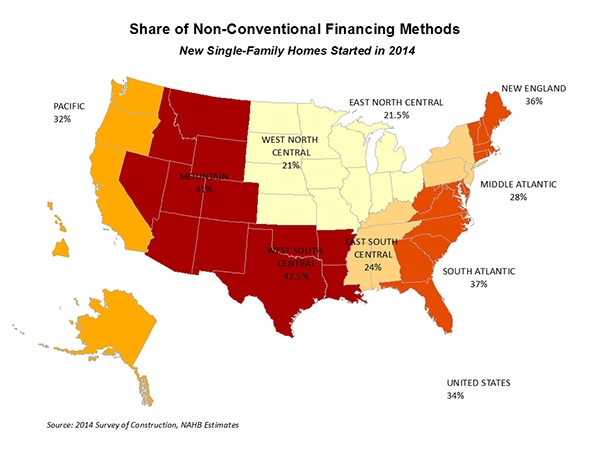 Astoundingly enough, cash purchases became the premier type of non-conventional financing for the first time since 2007. Cash purchases accounted for almost 13 percent of the market for homes started in 2014. New England recorded the nation’s highest share, with one in three new homes purchases with cash. The Middle Atlantic and East North Central divisions registered the second and third highest shares at 18 and 16 percent respectively. Conversely, the East South Central division only registered 8 percent of new homes purchases with cash.

The pervasiveness of cash financing in New England, East North Central and Middle Atlantic divisions can be partially attested to the popularity of custom homebuilding in these divisions, with all three claiming the top three custom home market shares in 2014. Statistically, custom homes are more likely to be financed with cash, especially if the owner is acting as the contractor. In 2014, while less than 9 percent of spec homes were bought with cash, one in three custom homes built by the owner were financed by it.

Mortgages insured by the Federal Housing Administration (FHA) accounted for 10 percent of the market. Following the steady decrease in FHA loan limits that came into effect on January 1, 2014 the share of FHA-insured loans fell and they lost their leading position as the dominant form of non-traditional financing for new home purchases. The Pacific, Mountain and South Atlantic divisions were among the hardest hit by these trends. FHA-insured loans lost between 4 to 5 percent of the market in these areas. 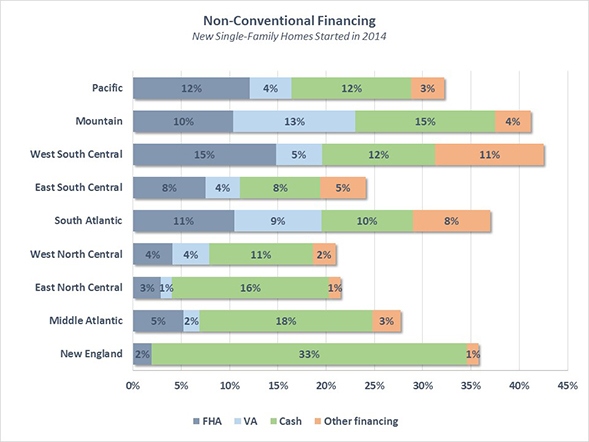 However, markets in these divisions responded contrarily to filling the void left by lower FHA loan limits. In the Mountain division, mortgage loans promised by the Veteran’s Administration (VA) grew in significance, acquiring 5 percent of new homebuyers. Their share neared 13 percent – more than double the 6 percent national average. The South Atlantic division is the only other division that saw an above national average share of the VA-guaranteed loans at 9 percent.

In the Pacific and South Atlantic divisions, there was a swing towards cash purchases. In the South Atlantic and West South Central divisions that also recorded a sharp drop in the share of FHA-insured loans, new homebuyers looked to alternate financing methods such as the Rural Housing Service, Habitat for Humanity, loans from individuals, state or local mortgage-backed bonds and more. In the West South Central division, the share of other types of non-traditional financing more than doubled, surpassing 11 percent in 2014. The South Atlantic division registered the second highest share at 8 percent, also exceeding the 6 percent national average.

The East South Central division, where more than a fourth of new homes were built in rural areas, saw close to a 5 percent share of non-conventional financing – most probably through the Rural Housing Service.