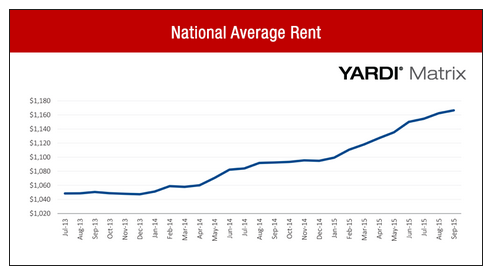 U.S. multifamily rents are now at a record high and still climbing rapidly. In August the average nationwide rent rose to $1,162, a 6.5 percent increase year over year. This percentage mirrored that of July when the average U.S. apartment rent rose to $1,155. And that’s not all: rents have been steadily climbing every month of 2015 and researchers predict this trend will continue.

The increase of $5 in September set a new record of $1,167. September’s year-over-year increase of 6.8 percent was 30 basis points higher than the previous two months as well as the highest growth in the post-recession cycle.

According to Paul Fiorilla, associate director of research at Yardi, this stems from an increase in demand. Strong job growth and immigration are the top two drivers behind the rent market. “The traditional drivers of demand are not going away, so there is no reason to think that this I not going to continue for the next year or so,” he adds.

From a demographic standpoint, as millennials move into apartments and more Baby Boomers start to rent rather than own, a growing number of multifamily households are being created.

The Southwest region, led by Atlanta, Orlando, Tampa and Miami is also exhibiting steady rent growth. In September, all were above the national average of 6.8 percent year-over-year. Moreover, rents in Atlanta, Orlando and Miami all increased by 0.7 percent during a trailing three-month year-over-year period with Tampa growing at 0.6 percent in the same time frame.

This upsurge is a result of above-trend employment growth derived from corporate relocations, increasing back-office staff and robust tourism. More and more people are drawn to these areas by the promise of new jobs and inexpensive housing causing the demand to skyrocket.

Conversely, the Midwest and Northeast are not seeing the same movement in rent trends. Richmond, VA and Washington D.C. fell below the long-term average. As Houston wrestles with the fall out of lower crude oil prices its year-over-year rent growth has fallen “to a relatively mediocre 4.9 percent and T-3 growth over the last three months has been almost flat at 0.1 percent (Matrix Monthly).”