As a result of the recovering economy and the Federal Reserve stimulus program that created an artificial cap, mortgage rates will inevitably rise. As this shift happens, homeowners who would usually consider selling their current homes to buy new homes actually hold onto them in order to keep their historically low mortgage rates, rather than take on mortgages with steeper rates.

Almost half of all U.S. mortgages have rates of 4.5% or less, a trend that buyers won't have for long, says Mark Fleming, chief economist at data aggregator CoreLogic. "There's a huge disincentive to ... refinance, and also to sell at any point in the future," said Fleming. "That's bad news for real estate agents; that's bad news for mortgage lenders ... [and] for anybody who participates in the turnover of housing." 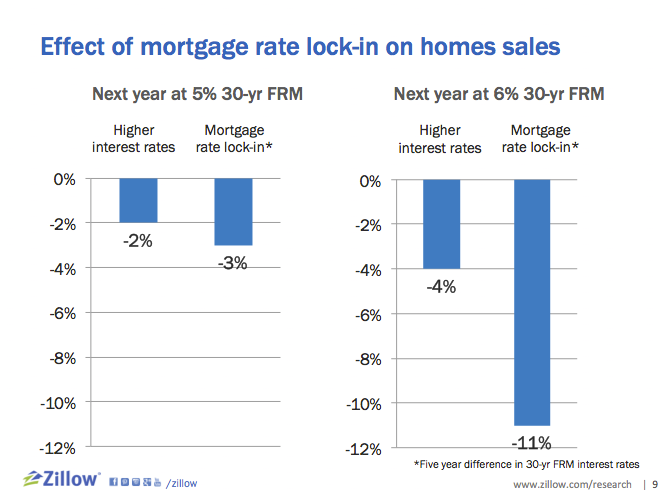 Zillow's Chief Economist Stan Humphries adds, "As mortgage rates get higher over the next few years, this is going to have a chilling impact on existing-home sales." For more than forty years, mortgage rates have decreased by an average of 4% every five years, consistently acting as an accelerant to home sales. In the last five years, however, they dropped by almost 10%, and was a boon for existing-home sales. But what has been a steady tailwind to the housing market for more than a generation is about to become a headwind, according to Humphries.

If mortgage rates rise to 5% next year, the lock-in effect on buyers would push down home sales by 3 %, if all other forces that affect the market were held equal. If they rise to 6%, says Humphries, the lock-in effect would drive sales down by 11%.