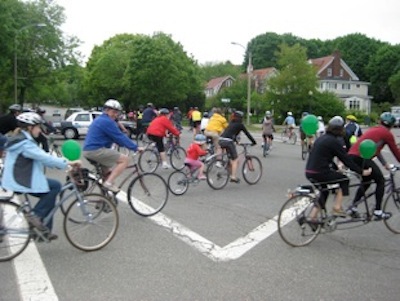 Newton can arguably be called the birthplace of American biking. With the first ordinary bicycle (also known as the "penny farthing" bike) made by Englishman R.H. Hodgson in a shop in Newton, and with the first and largest American bicycle manufacturer having roots as a Newton resident, Newton has had its fair share of bicycle history. But as a city we have come even further to making Newton  bicycle-safe. With Bike Newton, an organization dedicated to making bicycling a viable method of transportation, Newton has several ongoing projects that are aimed to making bicycling a continuing trend in the future.

For more history of bicycling in Newton, check out the Castles Unlimited blog "Newton, MA: The Birthplace of American Biking"

Anne Lusk speeks to bikers at the 2008 Rally & Ride Image from bikenewton.org

Bike Newton began as a name for a rally. In 2007, members from Green Decade Newton and the League of Women Voters came together to change Newton from being car-centric to bicycle-friendly.

Even with bike enthusiasts asking for change, the City government didn't seem interested in making roads safer for bikers; even in spite of the Commonwealth's Paulsen Bill mandating the road projects include bike accommodations like lanes and paths. The City avoided adding bike accommodations even after the pro-bicycling Newton Comprehensive Plan and Newton Energy Action Plan were passed. 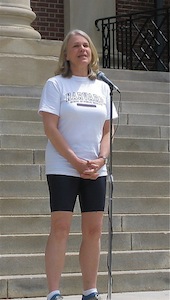 But in 2008, over 300 people took part in a rally to show City Hall that people would bike more if roads were bike-friendly. Bike Newton created a lot of buzz at the Veteran's Memorial steps, with a speech from Anne Lusk about safe bike accommodations, short bike rides, and even a meet-and-greet with Mayor Cohen.

Bike Newton went from event into organization, and they put together 2 more successful Rally and Rides in 2009 and 2010, with Boston's "Bike Czarina" Nicole Freedman and the first, and Newton's new Mayor Setti Warren leading the ride at the second. These events had the help and participation from many organizations, including Newton Bicycle and Pedestrian Task Force, MassBike, and Livable Streets.

After the success of the rallies, Bike Newton was awarded 501 c3 nonprofit status, and Mayor Warren appointed the Transportation Advisory Council the first "Share the Road" signs and the first miles of bike lanes on Beacon and Walnut Street.

Lois Levin has recently been appointed Bicycle Coordinator and Alicia Bowman appointed Pedestrian Coordinator. These volunteer positions in City Hall provide citizens with a contact for planning, transportation, and policy issues to do with biking and walking.

Newton as a Bicycle-Friendly Community 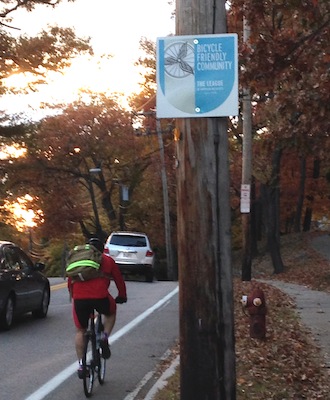 One of the ongoing projects Bike Newton has been in charge of since its start was applying to have Newton recognized as a Bicycle Friendly Community. They applied in 2009 after several subcommittees of Bike Newton's Steering Committee got portions of the application signed by the City of Newton.

Though the initial application was turned down, the feedback that was sent back in 2010 and then again in 2012 has created the base for improved planning. In March 2010, Bike Newton coordinated a community-wide meeting with city planners, policemen, Aldermen, and citizens to discuss the feedback and pinpoint areas for action.

And in 2013, the League of American Bicyclists, a national cycling organization, named Newton among the most bicycle-friendl communities in the country. Newton received a "bronze" status in its spring 2013 list. Its status was determined on factors such as bicycling infrastructure improvements, education and public outreach, and staff and police involvement.

"We are very pleased to see more Massachusetts communities honored for their bicycle friendliness," MassDOT Secretary and CEO Richard A. Davey said in the press release. "Our mission is to provide safe, healthy, and efficient transportation, and bicycle friendly communities to help support our GreenDOT policy objectives." 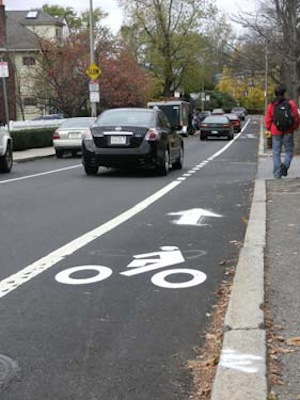 The Bicycle Network Plan is a working document of the Bicycle Advisory Committee, a subcommittee of the Transportation Advisory Group, to provide "guidance to city administrator, planners, engineers (et al) that will result in a safe network that is both functional and enjoyable for all types of riders into the foreseeable future."

The primary goal of this plan is to increase the number of bicycle trips throughout Newton for many reasons, but with a special focus on environmental, health and quality-of-life benefits.

The main objectives of the Bicycle Newton Plan are

1. To make bicycling in Newton much safer by ensuring that bicycling infrastructure will be built using the best possible design recommendations.

2. To increase bicycle routs in Newton by creating a network of safe, low-stress routes 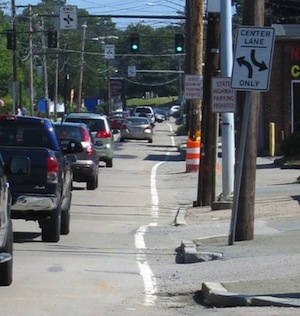 Starting with the Bike Summit in March 2010, Bike Newton has been working towards creating a new vision for Needham Street with an MBTA Green Line extension: a tree-lined boulevard with ample space for pedestrians, bikes and cars.

This Green Line extension would extend the Green line from Newton Highlands own to Needham Street using the existing rail-bed that is right behind Needham Street businesses.

This could possibly create significant opportunities for growth in the corridor, and would have significant environmental benefits to our communities by reducing energy consumptions and traffic pollutants in this otherwise congested part of our community.

Bike Newton is in support of this effort, with many other groups because the rail-bed is wide enough to safely support both light rail and mixed-use paths. This could facilitate a new Needham Street to take shape, one that respects the "complete streets" concept that calls for streets to be equally accessible to pedestrians, bicyclists, transit, as well as cars. To read more about "complete streets" click here.

The Washington Street Corridor Improvement Project is a plan written by Eunice Kim, a recent Bike Newton Steering Committee Member and graduate student at Tufts School of Public Policy, to improve the streetscape of Washington Street. Currently, it is both unsafe and unfriendly for non-motorists, but this plan maps out potential improvements that would add to both the safety and aesthetic appeal.

In this plan, some parts of Washington Street would have one car travel lane in each direction, and other parts would have more than one travel lane in order to make room for all forms of transport: cars, buses, trucks, bicycles, and pedestrians. At the moment, some feel there are too many car travel lanes, which diminishes the idea of sharing the road. Improving Washington Street would make it more accessible by other means of transportation.

Bike Newton encourages people to bike safely. Some services they include are:

2. Valet bike parking at the Cold Spring Park Farmer's Market every Tuesday from July to October

3. Biking safety courses by League of American Bicyclists-certified instructors, for all skill levels and ages

To learn more about these various services, click here 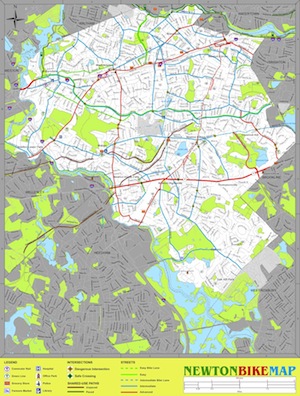 Aside from the routes marked on the map, there are bike trips available in several other locations.

1. A loop along the Aqueducts is an 8-mile ride along the Cohituate and Sudbury Aqueducts, starting and ending in Newton Centre. Click here for more details.

2. Bicycle Tour de Newton is a 20-mile trip that starts and ends at Nahanton Park. It tours all 13 of Newton's villages. Click here for more details.

4. Newton-Brookline Tours is a 19-mile (14 miles without the Brookline extension) that starts and ends at the Riverside MBTA station.

For more information on Bike Newton, visit their website.

To look for Newton cycling trails in your area, click here.