Bicycling has become a symbol of urbanity and style in the past few years, and a trend that has created a new mode of transportation. The popularity of commuting by bike has been growing worldwide, and once originally seen to be a European phenomenon, has traveled across the glove to make its mark here in America. But where did it begin? Arguably, Newton, MA was the birthplace of American biking. In the book, Peddling Bicycles to America: The Rise of an Industry, (which can be found at the Newton public library) Bruce Epperson highlights some important firsts that have occurred right here in Newton. Take a look at how Newton may have become the birthplace of the American biking craze. 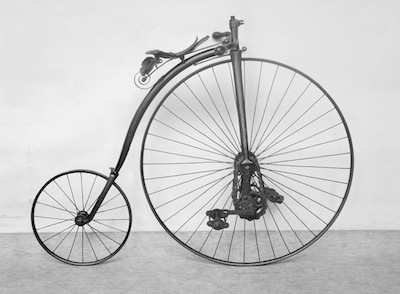 The first "ordinary" bicycle, or the "penny farthing" bike, made in America was by Englishman R. H. Hodgson, who owned and operated a small shop in Newton. These bicycles has a large front wheel and a much smaller rear wheel, and their name came from the British penny and farthing coin. In 1878, Hodgson made a small number of bicycles for the public to enjoy. He referred to his production as the "Newton Challenge", according to Wheels and Wheeling by Luther H. Porter. Another Newton resident, A.M. Good, may have made the first bicycle even earlier, but because his operation was so all, there are few records to give him credit. 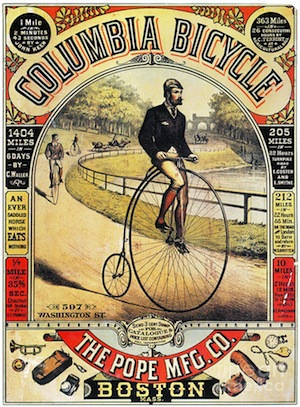 The first and biggest American bicycle manufacturer was Newton resident Colonel Albert Pope. In 1876, as a member of the Newton, Massachusetts City Council, Pope visited the Philadelphia Bicentennial Exhibition of 1876 and became enthralled with the latest English invention, the high-wheeled bicycle. He began importing and than manufacturing bicycles under the brand name "Columbia" in 1879. Pope Manufacturing was the first American company to manufacture bicycles on a large scale, and later became the most successful bike manufacturer in America during the "bicycling boom" of the 1890s. 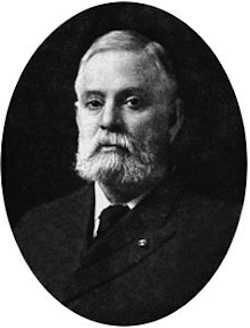 Although the production took place in a factory located in Hartford, Connecticut, Pope was a Newtonite and remained in and around Boston throughout his career. He was a founding member of the first bicycle club in America, The Boston Bicycle Club, and he founded the Massachusetts Bicycling Club, which Pope used as a marketing tool for Columbia bicycles.

Later in is career he manufactured electric automobiles under the Columbia brand and one even carried President Roosevelt in the first Presidential motorcade. 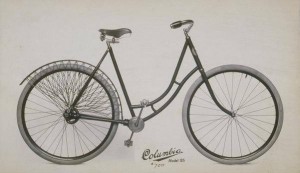 It was said Pope could often be found racing through the streets of Newton on a horse, trying and failing to beat his friend Alfred Chandler on an imported English bicycle. In David Herlihy's book, Bicycle: The History, Herlihy describes Pope's first encounter with Chandler on a bicycle in Newton as a key moment in Pope's decision to embark on manufacturing bicycles. Although there is some controversy in the history of when Chandler actually acquired his first bicycle and the tale may have been fabricated along the way, it remains an urban legend that makes for a great story.