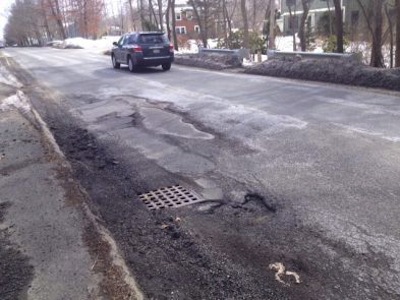 This has been one of the worst winters Newton has experienced in a long time. But even though the weather may have improved, and it is finally feeling like spring, winter stays with us, marking the roads across Massachusetts with potholes. 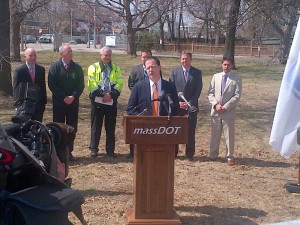 The Patrick Administration announced the 2014 Pothole and Winter Recovery Program at the beginning of the month to support and accelerate the repair of potholes and other damage caused by the recent severe winter weather. It will include one-time payments totaling $40 million to the Massachusetts Department of Transportation and cities and towns.

Newton has been awarded $348,919 to help pay for repairing those disastrous holes. The state determined funding levels for municipalities  based on population and miles of roadway.

"We've experienced an extraordinary winter season that caused damage to our roads, bridges, and vehicles well beyond the typical year," said MassDOT Secretary and CEO Richard A. Davey. "This one-time, targeted program will speed repair and recovery and maintain safe travel for motorists." 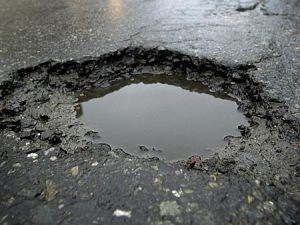 The bulk of the money ($30 million) will go to cities and towns based on the Chapter 90 formula that is used for state funding to repair and maintain roads and bridges. MassDOT has received nearly 1,700 pothole reports this year and has already spent more than $880,000 in repairing potholes on state roads. Since January, Boston alone has filled more than 10,000 potholes.

"Communities will put these funds to immediate use rebuilding and repairing roads in every corner of Massachusetts, which will save money, help our economy and improve public safety," said Geoffrey Beckwith, executive director of the Massachusetts Municipal Association.

So this spring and summer expect construction and road repairs throughout Newton and the Boston area. And hopefully next winter won't bring its wrath on our roads again.