"High Interest Project" Austin Street has been on resident's minds since the City first began their initial discussion about the redevelopment project in 2005. Since then, this development project has been growing and advancing. From the 2011 Joint Advisory Planning Group (JAPG) Report, "The City's determination to provide for the re-use of the Austin Street Parking Lot is principally focused on its potential contribution towards transforming Newtonville's center into a much better place." With each meeting and each step, this project seems to be the buzz on the street for local residents. 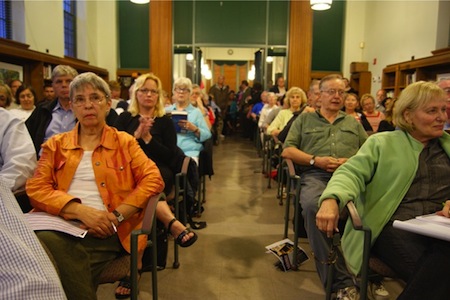 On June 27, 2013, over a hundred of Newton citizens gathered at the Senior Center to hear the Mayor's Office presentation regarding the proposed development project. Every seat was filled, and in the lobby stood a secondary crowd waiting eagerly to learn more about this project. The meeting covered background information, including the site history, developer selection, design review, and opportunities for public input. There were several concerns from the citizens about potential lack of parking both during and after construction, and how that would affect local businesses. Many seemed to favor a smaller project. 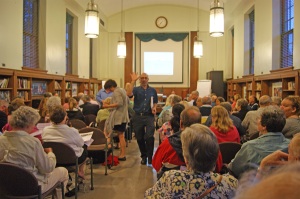 But the concerns from Newtonville residents have yet to stop the progress. The Alderman from Ward 2, in collaboration with the department of Planning and Development, cohosted a community meeting on October 30, 2013, regarding the proposals for the future development. The idea for a mixed-used development on the Austin Street municipal parking lot emerged from the Newton's Comprehensive Planning Process as a way to use underutilized City-owned land, creating village housing, add vitality to the village center, and create fiscal benefits for the village and the city.

And now, 6 months later, residents have begun to see Austin Street in a new light. After an online survey conducted by the Newtonville Area Council, it was found that three quarters of Newtonville residents (75%) would be receptive to an Austin Street development. And although the residents had a few criteria to be changed (they want new buildings to be three stories or less, they want fewer residential units, and they want 100 or more public parking spaces) support is at a high. 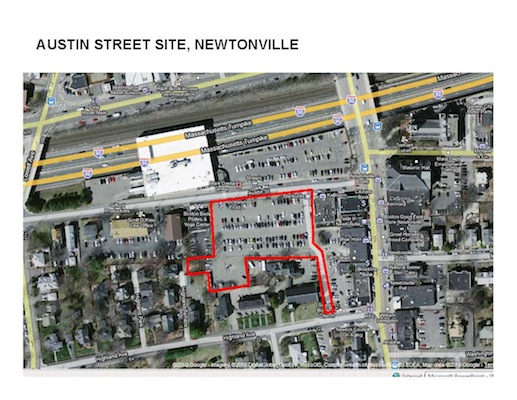 The proposed developments on the parking lot have been said to revitalize Newtonville and enhance a sense of community and ambiance in Newtonville's village center, help local businesses thrive, and support home values while meeting some of Newton's affordable housing needs. And there has always been a stress on retaining the necessary amount of public parking.

"The proposed development of the Austin Street lot in Newtonville will in fact change the neighborhood, but will do so for the better," said Chris Steele, Chair of the Newton Economic Development Commission. "While this may cause a certain amount of anxiety, it is important to remember why we as a city have chosen to make such a change. In this specific case, we are taking an asset that no longer meets the community's needs effectively, and investing in it will work better for our future."

Selection of a developer is the next step for the project, and there will continue to be extensive public input following the mayor's selection through community meetings, technical reviews with staff and various commissions and advisory groups.

Upcoming meetings will discuss and address some of the major concerns citizens have had, including parking, architectural form, the development plan, and the transition from Walnut Street to Austin Street to the residential neighborhoods. 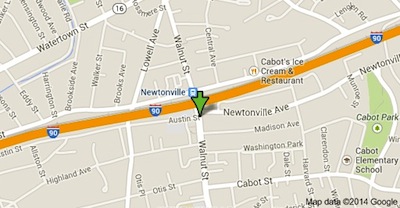 Regarding the retention of essential public parking on the site, parking studies will be undertaken to determine the necessary number of parking spaces that must be maintained to allow Newtonville to continue to flourish. The City has recently commissioned a professional parking study that will be completed by June 27, 2014.

"All community concerns will be thoroughly weighed during this next phase of the process," said Steele, which is a comfort to those concerned about the project.

On April 10, there will be a Zoning and Planning Committee meeting at Newton City Hall, in room 209 on the second floor. Here they plan to further discuss the proposal and see what steps will come next.

"The Austin Street development is an important opportunity that will bring valuable activity to the Walnut and Washington Street corridors," said Steele. "Newtonville is a great and vital village center and a great asset to the city as a whole. Let's make sure that it remains such a vital center and a great resource for generations to come." 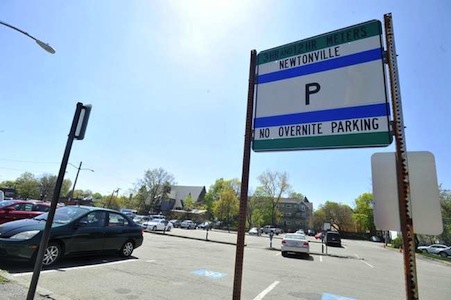