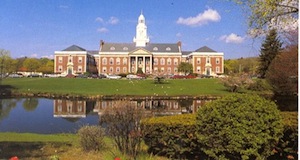 A passerby may look at Newton City Hall and just see a beautiful brick building with tall white columns at the front door sitting on a pretty park. Yes, the building stands tall and grand on the perfectly manicured lawn, but behind this historic facade lays the site for many important local government decisions. 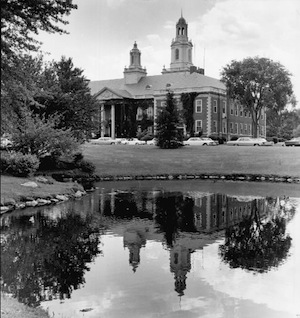 When Newton became a city in 1873, the old town hall was located on Washington Street in West Newton. It served for 59 years as the City Hall but was replaced in 1932 with the new City Hall building completed, located at 1000 Commonwealth Avenue in Newton Centre, on the corner of Walnut Street and Commonwealth Avenue.

Notable architects Francis R. Allen and Charles Collens designed this Georgian Revival building. Its landscaping enhanced the design and was done by the renowned Olmsted Brothers, who inherited the nation's first landscape architecture business from their father Frederick Law Olmsted. In 1936 Newton City Hall won the Boston Society of Architect's coveted J. Harleston Parker Award for being the most beautiful building of that period. 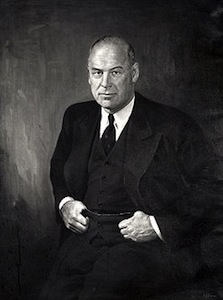 Newton City Hall was built during the Great Depression, even though many felt the construction of such a large building was unwise. The city's mayor at the time, Sinclair Weeks, had rebutted the criticism, citing that the project would relieve unemployment for Newton citizens. And he was right: 80% of the men working on the project were Newton residents. At the dedication, Mayor Weeks said the location of the City Hall near the geographical center of the city was "quite fitting" because it would be able to "mitigate the sectionalism, which was sometimes apparent between the various villages."

On February 16, 1990, Newton City Hall was added to the National Register of Historic Places, which is the United States federal government's official list of districts, sites, buildings, structures, and objects deemed worthy of preservation.

In 2001, the citizens of Newton adopted the Massachusetts Community Preservation Act (CPA), to help restore some of their historical sites. CPA provides local and state funds for affordable housing, historic resources, open space, and recreation land. In order to handle the new funding, the Community Preservation Program was formed. And one of its major projects is the preservation of Newton City Hall. Its goal is to "preserve, restore, and rehabilitate key, character-defining historic features and significant artifacts...while allowing the historic building to meet current community needs." 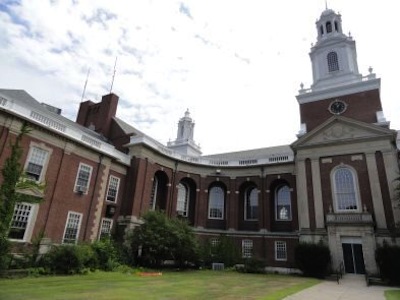 Newton City Hall is home to many public offices as well as a meeting location for Newton's boards and commissions, including the 24-member Board of Aldermen, which is Newton's legislative branch of municipal government.

The city clerk, assessor, comptroller, and election commission are located in City Hall, as are the offices of engineering, inspectional services, public works, and veterans' services.

Newton City Hall is also home of to the city's war memorial. Plaques, uniforms, flags, documents, and other memorabilia can be found on display on the first floor of the building.

The office of current Mayor, Setti D. Warren, is located on the second floor of this historical building.

Newton City Hall is located on

You can access Newton City Hall via many public transportation routes. It is located just over a mile away from the Newton Centre MBTA stop on the D branch (green line). It is also located close to the Newtonville Commuter Rail station on the Framingham/Worcester line (purple line). The #59 bus also stops nearby at the intersection of Chestnut Street and Commonwealth Avenue.

Any upcoming city meetings, as well as community event, can be found on the Newton, MA homepage. Click here to see what's scheduled for this upcoming month of April.