New England Development and WS Development, two of Great Boston's top development companies, have been pushing their constructions and creating more changes and stores to two of the most well-loved shopping centers in Newton: The Street and The Chestnut Hill Square.

Some history on the two... 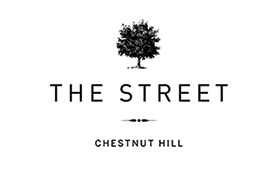 The Street was transformed from the Chestnut Hill Shopping Center in 2012. Starting as the region's oldest suburban center, it is now known to be a "retail destination fitting for the 21st century" and Massachusetts' first modern suburban mall, according to its website. Currently, The Street is undergoing redevelopment to expand the center to 406,000 square-feetand will feature a "new village-like streetscape complete with tree-shaded pedestrian walkways, outdoor dining, cafes and new buildings with glass facades overlooking scenic Hammond Pond" to create a "hip new town center".

Chestnut Hill Square is a new development across from The Street on Route 9 that opened early November of last year. The "easy to navigate, open air" shopping center features a mix of different shops and restaurants, according to their website.  They're selling points: Equinox, voted best Gym in America by Fitness Magazine, Wegmans, voted best supermarket by Consumer Reports, and nationally acclaimed restaurants Seasons 52 and Brio Tuscan Grille. And since its opening, residents are finally seeing these stores come into being.

The two shopping centers host directly competing brands, including The Street's dry bar Be Styled and Chestnut Hill Square's Drybar, Lululemon versus Athleta, and Sports Club/LA versus Equinox. But, with the two centers so close together, residents and locals have greater access to more stores and restaurants. Doug Karp, executive vice president of New England Development, says "I think we're really reinvigorating the Chestnut Hill market. This will be the 3.0 version." 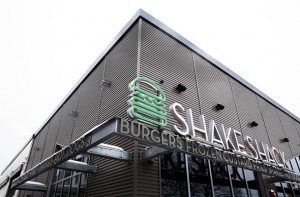 One of the first exciting changes Route 9 in Newton saw was the opening of the Shake Shack in The Street on March 20, 2013. Randy Garutti, Shake Shack's chief executive, said he liked the format of The Street, which gave his restaurant ample visibility from Route 9. It has generated a lot of buzz, and has attracted a long line of customers to the area. 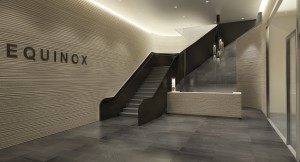 The Equinox at Chestnut Hill Square opened December 19, 2013 and has taken the area "by storm", according to its website. The fitness club features a spa, a grand fitness floor, modern lounge, five dedicated studios, Pilates, their renowned cycling program, and the revolutionary Figure 4 Barre class.  This is the third location in the Boston area and is one of the biggest additions to Route 9. 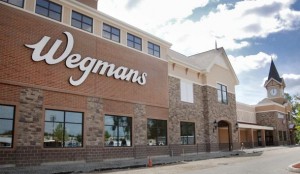 And now, one of the biggest changes to Route 9 will be the opening of the Wegmans Food Market on Sunday, April 27, 2014. The Wegmans Chestnut Hill will be about 80,000 square feet, with a 10,500 square-foot wine, beer, and spirits shop on the second floor (which will be open to the public March 29), and will be across the street from the Chestnut Hill Mall and become a part of Chestnut Hill Square.

"We're thrilled to announce the grand opening date of our new Chestnut Hill store, one that we've been looking forward to for sometime" said store manager of Wegmans Chestnut Hill Rich Boscia. "The Greater Boston community has already welcomed us with open arms. We can't wait to provide our Chestnut Hill customers with the incredible customer service and the unique shopping experience that people have come to expect from Wegmans"

The opening of the store will provide the area with both part-time and full-time positions spanning across each department at Wegmans, including front end, grocery, and prepared food departments for part-time and customer service and culinary professionals for full time. And of the 350 part-time positions available, 100% of them will be hired locally, according to Jo Natale, the Wegmans Director of Media Relations, and Stacy Clougherty, RF.

"At Wegmans, we pride ourselves on our reputation for offering an excellent working environment for our employees," said Marybeth Stewart, Wegmans human resources manager for New England. "We're continuing to hire for our Chestnut Hill store and hope those in the Greater Boston community looking to start their career or begin a new chapter in their career will consider Wegmans as their future employer."

With the Wegmans opening becoming the biggest new edition to Route 9, it will be exciting to see what else will come to both The Street and the Chestnut Hill Square.