What's In Store for Copley? 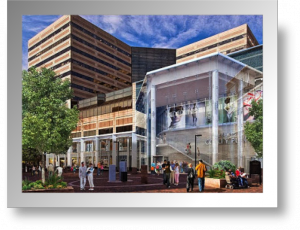 Simon Property Group is moving forward with plans for a 47-story tower at Copley Place that would be the largest residential building in Boston.

They say in a new city filing today that the development would ensure the complex "maintains its status as the most attractive retail destination in Boston metropolitan area."

Indianapolis-based Simon is proposing to build 318 residences, a larger Neiman Marcus store, and a glass-enclosed garden with additional retail stores at the corner of Dartmouth and Stuart streets.

The $500 million project, situated across from the Massachusetts Bay Transportation Authority's Back Bay Station, would fill out the last undeveloped parcels in Copley Place, which was initially built in the 1980s over the Massachusetts Turnpike roadway and ramps, and on a former railroad yard.

"The expansion of Neiman Marcus and Copley Place strengthens our retail destination in the Back Bay and contributes to the City's economic vitality," Michael E. McCarty, Simon's executive vice president for development said in a press release.

"The project will enhance the urban fabric of the neighborhood and be a striking addition to the city's skyline."

The project attracted controversy recently when Boston state representatives Marty Walz and Byron Rushing accused Governor Deval Patrick's administration of violating a 1997 agreement by signing a revised lease with the developer before city and state regulators could review its impacts on area residents.

The firm has not said when it hopes to start construction. It still needs approval from the Boston Redevelopment Authority and state environmental regulators before work could begin.

Some neighbors have raised concerns, for example, that the project will add to the high winds and shadows thrown off by other skyscrapers in the area.

But Simon asserted in its filing today the tower would not significantly increase wind in the area and would cast minimal new shadows on surrounding open spaces.

It also said it has rotated the tower from its initial orientation on the site and made several other design changes "to minimize environmental impacts, provide improvements to the public realm, and greatly enhance the overall pedestrian experience."

Built by Chicago-based Urban Investment and Development Co., Copley Place was at the time the largest mixed-use project in the country. It was criticized by neighbors and some public officials for the way its hulking buildings towered over town houses in the South End.

The Simon building, designed by Elkus Manfredi Architects, would add 755,000 square feet to the complex. In addition to its 318 residences, the project would include a large addition to the to the Neiman Marcus store, followed by a complete renovation of the existing 115,000-square-foot store - which will not close during construction.

It will also include additional space for smaller-scale retail shops and restaurants, with a "public winter garden" at the Stuart Street plaza.

Simon initially proposed the project in June 2008, but put it on hold when the recession dried up funding for big projects.

The company resurrected the project in the spring and has been meeting with residents and city officials in recent weeks to discuss its design and impacts on traffic and pedestrians and other matters.

Courtesy of Casey Ross of the Boston Globe http://www.boston.com/realestate/gallery/copley_place_dpir?pg=6